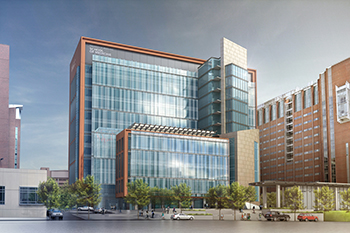 BALTIMORE — The University of Maryland, Baltimore recently broke ground on a $305 million, 10-story biomedical research facility. At nearly 430,000 square feet, the Health Sciences Facility (HSF) III will be the largest building in the history of the university.

Designed by HOK, headquartered in St. Louis, in partnership with Baltimore-based Design Collective Inc., a groundbreaking ceremony took place Sept. 17 to celebrate the building that will cultivate the advancement of the School of Medicine.
Construction on the facility is led by Barton Malow Company, headquartered in Southfield, Mich., which is serving as construction manager on the project.

Several state and local officials attended the ceremony as the building is expected to have significant impacts on the state’s economy and to the subject of biomedical research as a whole.

“With this groundbreaking, we are ushering in a revolution in biomedicine here at the School of Medicine, where fundamental research and advancement in technology converge to create new pathways and new opportunities for science and technology to dramatically impact the health and well-being of the citizens of Maryland and the region, while positively impacting the economy of our state,” said E. Albert Reece, vice president of medical affairs at the University of Maryland, at the groundbreaking ceremony.

The new facility is one of the largest undertakings of the university, both in terms of size and cost. HOK’s design of the new facility features elements that will help the building integrate into the current architectural climate of the campus as well as new design elements that will help the building stand out as a premiere biomedical research facility to attract researchers around the world.

“Although we’re trying to be a little bit more contemporary and a little bit more toward the recruitment and retention side, we are still trying to work with the existing urban fabric and campus fabric to integrate that into our facility,” said Tim O’Connell, project manager with HOK. 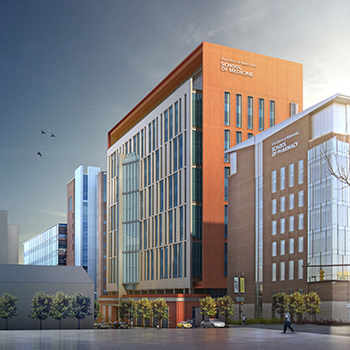 The exterior design uses a great deal of glass in order to provide natural daylight to all areas of the building.

“We really concentrated on getting natural light into all of the spaces, not just necessarily the lab spaces and the offices spaces, but even a number of the support lab spaces,” O’Connell said. “The reason why is because we found researchers working in lab support spaces for six or eight hours a day.”

The new facility will include research laboratories, vivarium space, BSL-3 laboratories, a nanomedicine suite, high-end imaging suite and replacement space, which will be used as renovations take place on other campus research buildings.

The building is also unique, O’Connell said, because it includes both wet research and dry research space in the same facility. The ability to allow each is in keeping with the continued growth of both research areas.

“A lot of people assumed that as bioinformatics and dry research started to grow, all these other facilities would decrease in size,” O’Connell said. “We’ve actually seen the exact opposite. As the dry research grows exponentially, all other components seem to grow as well — not quite as fast — but they have definitely continued to grow.”

The HSF III is set for completion in January 2018.