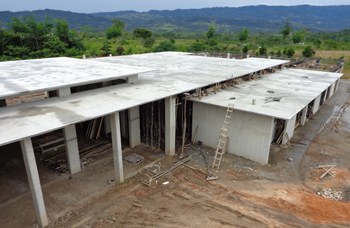 YANTALO, Peru — Quality health care is making its way to the rainforest village of Yantalo, Peru. The Adelina Soplin, Yantalo Clinic & Diagnostic Center — the first green health care clinic in Peru — is currently under construction and is scheduled to debut in August.

Construction began in June 2009 and is funded by donations to the Yantalo Foundation, a nonprofit created by the Vasquez family to give back to the local community. The construction team is made up of local contractors and engineers; Gina Gangialosi and Lauren Garza designed the architectural plans, which follow California codes of construction because the area is also in an earthquake zone. In the U.S., the facility would cost about $12 million, but because labor is less expensive in Peru, it cost $3 million.

Faculty, students and friends of the NewSchool of Architecture and Design in San Diego played an intricate role by donating their time and expertise to the construction project. The school of architecture was chosen because the Yantalo Foundation needed expertise from one that works specifically on hospitals, and the San Diego school had just completed one in Vietnam — a country with a very similar tropical climate as Peru.

The school workers helped the foundation for two years and did a lot of preliminary work with focus groups that collected input from patients, nurses and visitors so the clinic could be designed with their observations in mind. For instance, clinic staff suggested incorporating an automatic light system in case people forget to turn out the lights, as well as designing offices closer to where they physically work to avoid wasted time traveling to and from their offices. The school workers also helped teach local Peruvian construction workers some building techniques, such as how to create interior dry walls.

The facility is an answer to the lack of medical services in the region, and it was brought to fruition because of the emotional connection that Luis Vasquez, founder and president of the Yantalo Foundation, has with the town. “I think part of it is emotional in the sense that Yantalo is the town where my mother was born and the medical services in that region are very, very deficient,” Vasquez said. “These factors triggered our decision as a family to do something about it. At first we wanted to do something small, but as more universities got involved, we wanted to do something more sustainable that would have an impact much farther than it’s geographical radius.”

The 16-bed international clinic will be equipped with telemedicine, solar power and intelligent water use to be environmentally responsible, as well as lower operating costs. It will serve all members of the region, covering some of the services for those that are unable to pay and also operate as a training center for local medical students and physicians.

As the first green health care facility in Peru, several sustainable elements were involved in the design. Daylighting became a major factor for the facility, especially since Yantalo has 365 days of sunshine, so all the rooms have a distribution of glass bricks built into the roofs. Very large windows also allow patients and staff to see views of the outside. Natural air flow using fresh air was another major design element that guaranteed good air quality and making the building cool enough so that air conditioning would not be necessary. (Only the surgery and laboratory rooms will have air conditioning). Solar panels are also being added to generate electricity for the facility, which will be located on the roof of the adjacent parking structure.

The construction team is also helping with reforestation efforts. The clinic is being built on a site that was used for agriculture and all the trees that were previously growing there were cut down. The Yantalo Foundation decided to refurbish the area by planting 10,000 trees — about 7,000 of which are already planted, with the remainder to be planted before December.

The biggest challenge was getting quality water for the facility, but the construction team built two wells — one 80 meters deep and the other 60 meters deep — and the water quality has been tested, guaranteeing clean water to patients and staff.

Once completed, the clinic will open with five physicians, eight nurses and four technicians on staff, as well as an average of 80 students in residence (mainly medical students) from 14 different countries visiting throughout the year. Vasquez said that the facility would see an estimated 15,000 patients annually and is being built with 10 outpatient offices. The number of facility staff may change depending on the clinic demand.