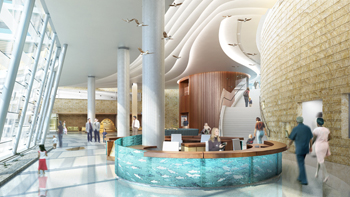 PALO ALTO, Calif. — Stanford University has become known for its ties to the Silicon Valley area of California, which supplies the school with a bevy of local tech philanthropists that give back to the university and provide a direct pipeline for students into the private world when they graduate and begin their careers. This connection between the area’s public and private institutions continued to grow at the recent groundbreaking for the college’s expansion of its Lucile Packard Children’s Hospital, a project that has already received multiple donations to the tune of $250 million.

Hewlett-Packard (HP) CEO and former candidate for California governor, Meg Whitman, was on hand to explain her company’s legacy at the hospital and its contributions to the current project. HP donated $25 million to the expansion and the company’s engineers designed software to help schedule surgeries efficiently and identify children at increased risk of suffering a heart attack. The hospital draws its name from Lucile Packard, wife of HP cofounder David Packard. Lucille spent much of her life volunteering for various efforts to improve the lives of children, a cause that the David and Lucile Packard Foundation continues to pursue to this day.

The hospital will also add 3.5 acres of gardens and outdoor space, along with specialized operating rooms and new medical technology. “The new hospital has been designed not only for our patients today, but also for what we anticipate will be their needs in the future,” said hospital President and CEO Christopher G. Dawes. “The new facility will incorporate the very latest medical technology while also providing more privacy and space for families to be with their sick child or pregnant spouse.” One hundred and forty six of the rooms will be private and provide arrangements for families to stay in the same rooms as the children the hospital serves. These features will include fold-out double beds, flat-screen televisions and private bathrooms with showers. The new space will also feature various playrooms targeted for specific age groups.

The addition will also include seven new surgical rooms, two of which will feature various advanced imaging technologies, like MRIs. In many hospitals, patients have to go to a separate section of the facility to access those functions.

There are also several new measures to improve the staff’s well-being and productivity, including centralized meeting rooms, strategically located storage spaces to streamline operations, additional locker room and shower facilities, and outdoor break areas specifically designated for staff to get a moment away from the public and patients. Many of these changes are a reflection of how much the world has changed since 1991 in terms of standards for hospitals and basic changes in how workplace environments are structured and run. “It’s not just about bricks and mortar. All the workflow details have been taken into consideration and incorporated,” said Denise Bickert, MS, RN and administrative director of perioperative services. "Everything will be organized more logically, with larger rooms and efficient set-ups."