HARBOR CITY, Calif. — Construction is under way on a new 108,000-square-foot hospital annex building to precede construction of a new main hospital and laboratory renovations at Kaiser Permanente South Bay Medical Center in Harbor City.
Hospital design-build firm HBE Corp. is providing architecture, engineering services, construction and site work for the $294.7 million project.
Kaiser hired HBE after its board of directors spent more than seven years working unsuccessfully with architects and a construction manager to produce an affordable plan for building a new hospital that would not disrupt the current hospital’s operations, the firm said in a statement.
HBE provided Kaiser with an alternative design and fixed price that rivaled HBE’s competitors.
The four-story hospital will include 383,000 new square feet and 18,500 remodeled square feet. It is expected to be completed in 2015 with no disruption to existing operations. The annex will be completed in June.
A 40-position emergency department, nuclear medicine unit, interventional radiology unit with two IR rooms, four 24-bed medical/surgery units, and a separate 10-bed ICU are among the services that will be offered. The facility is one of HBE’s largest healthcare projects to date. 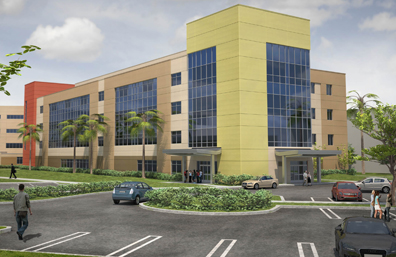 Construction is taking place in five phases:
Phase 1: Construction has begun on the four-level, 108,000-square-foot Hospital Annex building that will house physician clinic space on two levels. The building will also house a 68-bed medical/surgery unit and shell space. A corridor will be constructed to connect the existing hospital.
Phase 2: Simultaneous to construction of the Annex, HBE will renovate a 12,000-square-foot laboratory in the existing South Hospital.
Phase 3: After occupancy of the Annex and the lab renovation, two existing east wings of the North Hospital building will be demolished.
Phase 4: Construction will begin on the 275,000-square-foot, four-story hospital addition.
Phase 5: Concurrent with work on the hospital addition, mechanical and electrical work will be completed in the existing central utility plant.
Phase 6: When the new four-level hospital is occupied, the existing north building will be demolished. A new west parking lot will be constructed, as well as a west entrance to the new hospital.
HBE has completed nearly one thousand healthcare projects, including replacements, renovations and additions.