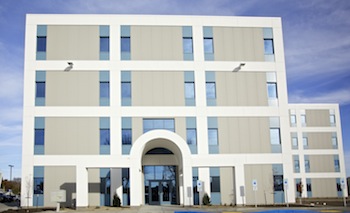 For the 2009-2010 fiscal year, the average utility costs for all buildings on the hospital campus including electricity, natural gas and water was $2.82 per square foot.

The estimated cost per square foot of their new Center is $1.47 – savings of about 48 percent in energy costs, with the aim to start looking at energy comparison websites in the effort to increase their savings some more down the line.

The current savings were made possible using BIM, which allowed the team to create 3D depictions of potential conflicts between runs of air ducts, electrical conduits or sprinkler lines and a more efficient exploration of walls, windows, doors and other structural elements using virtual building walkthroughs.

While the original plans called for a total-electric, three-story building with a fully functional basement, soil samples disclosed flowing water 12 feet below ground.

The team opted for a fourth floor instead using Geopier technology to establish a stable foundation in lieu of the traditional methods of excavation and footings that would have been compromised by high ground water conditions, according to hospital officials.

To adapt to the local climate of cold winters and hot summers, the facility design included a geothermal energy system and water-source heat pumps supported by 303 wells, which will provide the building’s entire heating and cooling.

The geothermal energy system also receives heat recovered from the Information Service’s data center, heating the building in a two-step process – first, water circulates through the cooling coils in the data center where it absorbs heat generated by the computer equipment. In the second step, the water is sent throughout the building for additional cooling to rooms and spaces as required, then ultimately returns back to the 14 water-source heat pumps, re-chilled and ready for the cycle to repeat.

Going hand-in-hand with the temperature, outdoor air was vital to the facility’s indoor air quality but can be expensive to temper, according to hospital officials.

“If not conditioned properly, a building can experience both humidity problems and excessively dry conditions,” a statement from the hospital said. “A dedicated outside air system (DOAS) in the new building uses 100 percent outside air with no return. In addition to improved humidity control, DOAS’s other benefits include enhanced occupant control, cost savings due to only one unit to handle this building rather than the 12 units required in a conventional building of the same size, as well as less space necessary for the equipment.”

The DOAS unit feeds the Center’s 300 radiant ceiling chilled beam system on all floors, further heating and cooling the building. The German-made units are designed to reduce noise, save enregy and increase occupant comfort.

“Additionally, the chilled beams reduced the height of each floor by one foot which allowed the building to meet maximum height limitations without incurring added costs due to more stringent building codes for taller structures,” the statement said. “The building is zoned throughout each floor with individual thermostats.”

Instead of traditional copper, the hospital used a proprietary polypropylene piping that is corrosion resistant, fire-rated, freeze tolerant, recyclable and self-insulated, which will minimize condensation from forming on the pipes. Compared to copper, it saved about $230,000 and about six to eight weeks of installation time, according to the statement.

The building’s structural system was engineered and fabricated on Tekla BIM by Butler Manufacturing, a new capability of the Kansas City, Mo.-based company traditionally known for preengineered metal building systems.

The Butler metal building systems used for the walls are a combination of a preinsulated exterior metal wall panel system backed by heavily insulated steel stud construction, with an exterior finish that mimic stucco.

To keep out summer’s heat and winter’s sub-zero temperatures, the building envelope features high efficiency double pane low-E reflective windows, a continuous internal vapor barrier and radiators under the windows to reduce the potential for a cold air draft, frosting and condensation.

With an additional six inches of fiberglass insulation in the C-channel purlins fastened to the wall panels, the building envelope’s total insulation value comes to R42.

The facility incorporates the top four of 15 energy saving technologies evaluated in a recent Department of Energy Technical Study, with an estimated return on investment of four years or less for advanced controls.

The ground source geothermal system with DOAS and chilled beams having an immediate payback, according to the statement.