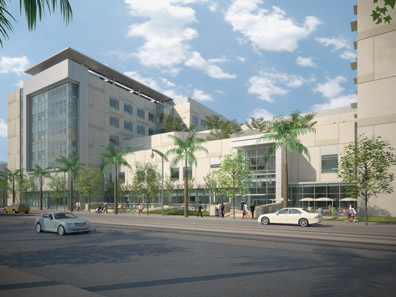 SAN FRANCISCO — The financing plans at the new 878,000-square foot University of California — San Francisco Medical Center called for obtaining $700 million in external loans and an additional $600 million from philanthropic donations — unthinkable to some in these tough economic times.

But by 2014, if things continue to go well, the UCSF Medical Center at Mission Bay will have parlayed a decade or more of vision and planning into a world-class medical facility with the opening of three breakthrough hospitals: Children’s, Women’s Specialty and Cancer. These advanced healing environments will elevate care in the Bay Area by being the only medical facility to integrate teaching, technology and treatment on the same campus.

With an emphasis on comfort and community, UCSF will join entire families in the healing process. By using patient-centric private rooms filled with natural light and bordered by gardens, incorporating the highest standards of energy efficiency, seismic safety, and sustainability, the Mission Bay hospitals will set new benchmarks for 21st-century health care enterprises.

The new facilities will also allow UCSF, which has outgrown its current hospital facilities, room to grow.

UCSF will further encourage the kind of collaboration-translating laboratory discoveries into next-generation therapies that it has in the past, becoming one of the top 10 medical research facilities in the United States, according to hospital officials. Physicians and scientists will have the unique opportunity to partner, creating the best possible solutions in treating cancer medicine and women’s and children’s health. Advanced patient safety protocols, reliable and efficient electronic records, and cutting-edge technologies from robotics to imaging, will further acknowledge UCSF as a model of modern healing.

“[The University of California] and UCSF medical centers are already renowned leaders in translational medicine-applying cutting edge discoveries to clinical care as well as developing innovative partnerships in biomedical, regeneration medicine and related discipline,” says Cindy Lima, executive director of the Mission Bay Hospitals Project at UCSF, who has been involved in the medical center project for the better part of six years.

“But they do not consistently have facilities of the same caliber in which to support their families and staff and to be maximally responsive to changing medical technology,” Lima said. “The construction of the new Children’s, Women’s Specialty and Cancer Hospitals at UCSF Mission Bay will benefit all UCSF programs and campuses as space is developed for expansion and development of new programs across the enterprise.”

According to Lima, the new 878,000 square-foot UCSF Medical Center at Mission Bay that is under construction has been granted an opportunity to be built from the ground up based on extensive study of other facilities, and a vision to create uniquely supportive, welcoming, light-and art-filled spaces which includes 60,000 square feet of rooftop gardens.

Other features include ample space for families to stay in patient rooms, innovative and individualized media access in each patient room, noise reduction (rubber flooring, no overhead paging, sound attenuation), comfortable areas to congregate as well as to find respite, such as meditation areas, and areas dedicated and designed for patient education.  There will also be extensive child-life areas such as a San Francisco Unified School District schoolroom, located within the hospital, along with music and pet therapy programs.

As of September 2010, the Campaign for UCSF Medical Center had procured commitments of an estimated $375 million, including two substantial gifts of $100 million or more — making it the only capital project in the hospital’s history to receive two nine-figure gifts.

“We’ve got tremendous momentum to support not only this exciting project but the larger vision of UCSF to advance health worldwide,” says Lima. “Thanks to the vision and generosity of Marc and Lynne Benioff, who donated $100 million to the recently named UCSF Benioff Children’s Hospital.” [Benioff made his fortune as the founder of SalesForce.com].

Monies from the Challenge for the Children fundraiser will be allocated to the new 183-bed Children’s Hospital, which will offer urgent and emergency care, primary care, specialty and outpatient services, and an on-site helipad. 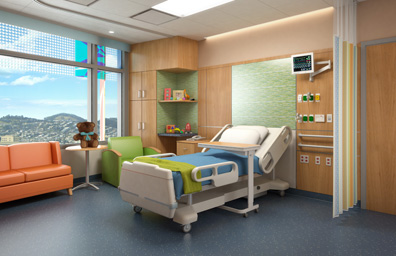 Due to the State of California’s fiscal situation, the funding plan at the Mission Bay facility no longer includes state funds. However, UCSF Medical Center plans to pursue seismic-related state funds, if available, to pay back hospital reserves.

Lima said that the university was fortunate enough to reduce project costs by 20 percent, no easy feat for such a large-scale project. The reductions were achieved through a combination of savings due to the recession, innovations and value engineering. The process was possible due to innovations in architectural technology, with the entire 878,000 square-foot project being virtually “built” via 3D Building Information Modeling.

“We were able to reduce the project cost over $200 million from the 2008 budget,” Lima said. “About half the cost was due to the recession and bidding strategies. The other $100 million was achieved through painstaking review of all the building design and elements, and hundreds of creative ideas that our team of architects, CM advisors, the general contractors and our subs collaboratively proposed and evaluated.”

The UCSF Medical Center’s targeted goal is the coveted LEED Gold certification — a lofty goal given that hospitals are some of the most notorious energy users.

“UCSF and a project like the new Children’s, Women’s Specialty and Cancer hospitals at Mission Bay are efforts that everyone really is proud to be connected with,” says Lima. “I’ve been honored to be able to be part of making it happen.”